I wasn’t able to write my mini memoir yesterday, but if you read the next two posts, you’ll understand why:

The weekend started off great. I had invited my writers group to my parent’s house for a mini writers retreat for the long 4th of July weekend. We met early so we could all sit together on the MetroNorth train. About ten minutes into the ride, the train lurched to a halt. This is quite common on the MetroNorth, so I thought nothing of it.

After about five minutes, people started opening the door between the cars and walking from the south end of the train to the north end. Still we thought nothing of this, because there were no announcements. Then we all smelled it. A burning acrid smell. Something was wrong. Just as quickly as we realized this, the crowd of people walking through the aisle doubled in size and urgency. A baby was crying, someone’s dog was barking, and everyone was shouting, ” run.”

We looked out the window and saw that the entire back of the train was covered in a gray haze. People were walking on the tracks, looking disoriented. Someone yelled at me to open the emergency window. Panicking, I fumbled with the emergency lock, but my husband, the ever-lasting boy scout, said that we should keep calm and wait for the announcement. After all, it didn’t make sense to open the window, and jump down ten feet onto the electrified third rail. Christina, who’s a trained yoga instructor, was telling everyone to breath. You’d be surprised how easy it is to forget such a simple task when you’re panicking. 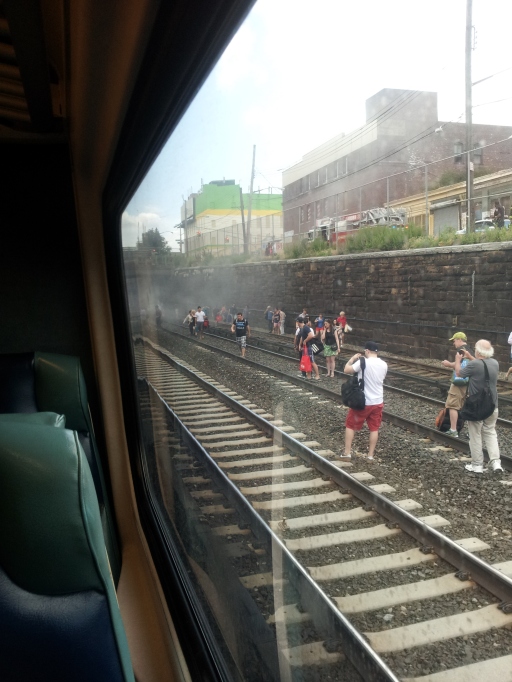 I love that people are still taking pictures when they’re standing on active train tracks. Not a moment shall go untweeted!

After another ten minutes the conductor finally announced that there was a fire underneath the train, and that only one door had reached the platform so everyone had to move to the first door in the train. The fire was under control, so there was no need to panic. He told us not to use the emergency exits. I had had the brilliant idea of bringing our two cats along for the trip so they could have some fresh air for the weekend. Now I was stuck lugging them through the smokey train while they hissed and whined.

We were one of the last to get off the train. I was hoping that some sort of transportation solution would be figured out by the time we exited, but instead, there was just an angry mob of people who did not want to be stuck in the Bronx in 96 degree weather on the 4th of July. Through the grapevine, we found out that the fire was caused by someone throwing a mattress on the train tracks. The super flammable stuffing caught fire, and the coils tore up the machinery under the train. We watched as fire fighters pulled out what was left of a the mattress; a scrambled up piece of charred wire. 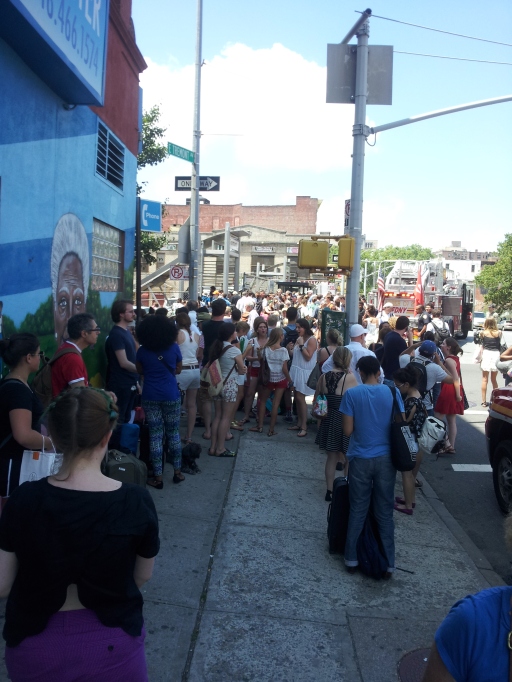 This experience taught me never to bring cats, dogs, or babies on the train…and only pack what you can carry.

One emergency worker told me that the trains would not be running for at least two hours. My cats, nor us, could handle the heat for that long. I flagged down a cab, and since he had no idea where my parents’ town was he offered to do it for $70 (normally it would cost $150). As I was talking to the driver, a man next to me said that his friend was picking him up  and they could drop us off in my parent’s town. Hallelujah!  Four of my friends squeezed into the taxi with my cats and they drove of north. Mike, me and Christina waited for the guy’s friend who was apparently lost.

An older woman asked if she could join us on the ride. It would be cramped, but who were we to turn her down when we were given this unexpected gift? The friend showed up twenty minutes later, and the four of us scrunched into the back seat.

On the ride up north, we talked about our 4th of July plans. It turns out that the woman had been born in France, but lived in the states for the last 20 years. The driver and passenger were both from Pakistan but were now U.S. citizens. I couldn’t help but appreciate  that on this day of celebrating America, we were in a car filled with immigrants that represent one of the things that I love about America: diversity of cultural backgrounds.

My dad met us at the train station and whisked us off to the BBQ. I found out later that our train arrived in the station five minutes after us.

Stay tuned for part 2…it gets worse.