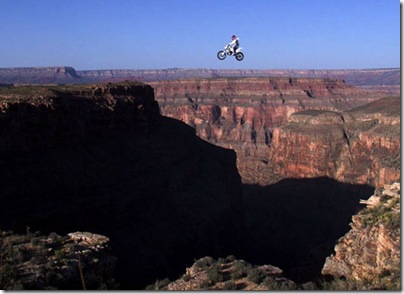 If there’s one person who knew how to just take life by the horns and follow what their heart and soul desired, it’s legendary daredevil and Guinness World Record holder Evel Knievel.

What very few people know about the man was that prior to becoming the high-flying motorcyclist he’s known for today, Knievel had several run-ins with the law because of a history of elk poaching. It was only after being confronted by the law did he change his ways for the better, becoming a key figure in promoting awareness for the species as well as sustainable hunting. This was the beginning of his shift away from criminal acts and to the awe inspiring stunts he’s become inseparable from.

Like Evel Knievel, sometimes, people just have to let go of what’s holding them back and take a chance on something they’ve always wanted to do. Maybe it’s finally mustering up the courage to take a new job that might make them happier. Maybe it’s finally picking up the phone and reconnecting with family that they’ve been estranged from for so many years. Or maybe it’s just finally breaking away from the monotony of everyday by trying their luck with a few spins on the slots.

Life is all about taking calculated risks and knowing just how far you can go to achieve personal happiness. While Knievel might hold the Guinness World Record for most broken bones in a lifetime (433 bone fractures!), this didn’t stop him from pursuing the one activity that made him and his fans happy.

Even after passing away in 2007, memorabilia and merchandise highlighting his accomplishments can still be found everywhere – From slot machines at Betfair Arcade dedicated to him to official T-shirts at his official webpage, and even a rock opera hosted at the Bootleg Theater in LA. While it’s not possible for everyone to live the same kind of life America’s most iconic daredevil did, everyone can take a page from his book and live a life of no regrets.