As I mentioned in the past posts, I’m making a movie with my friend Caroline! So far I’ve talked about how important it is to be committed and have the right attitude. The next step was all about the work.

Once Caroline and I decided on the story, an idea she had about what we do for the people we love, we sat down with index cards. Each card represented a concept that we wanted to address in our film. We brainstormed each of these concepts, filling the index cards with notes. For homework, we decided to each write a version of the story and send it to each other.

From there, we came up with a script we liked. We then asked some of our actor friends to do a reading for us to hear how it sounded. It was amazing to hear our words read with so much emotion. The actors, who are trained to understand character, were so helpful in pointing out inconsistencies and weak spots. A huge thanks to Laura Hankin, Katrina Medoff and Ashley Harrell for their time and expertise. Sorry about the blurry pictures below:

After that reading, we decided that we wanted to try a different approach to the story because a lot of it took place in a car and we thought that would be too difficult to film/boring to watch. We tried out thirteen different versions without a car. We decided on a version we liked, and then the next day we decided we didn’t like it. At that point, it was starting to get overwhelming. It was looking like we’d never agree on a final script

Over a fantastic dinner of pizza and wine, Caroline and I realized that every version we wrote was really good and that we both had high standards for the project. The truth was, we could go out and film any of the scripts we wrote and make a  beautiful film. This realization was a huge relief. It meant that we weren’t stuck, we were still climbing.

We both agreed that this was the only stage where we could play around with the movie as much as we wanted to. Fortunately, Caroline and I are both great with letting go of our writing for the sake of trying something new. This approach can be scary, deleting pages that you love, but it leads to fresh ideas.

After that dinner, we tried out six very different ideas. We settled on one that incorporated a lot of the different ideas we had while remaining simple. Then we sent that version back and forth, fine-tuning it.

Finally, we sent it out to people we trust to get their feedback. The response was incredible. While we got some minor notes to make things clearer, overall everyone loved it!

Now that we are busy finding the cast and crew, we still tweak the script every few days. All in all, for a ten-minute film, we probably wrote close to 200 pages of script. What we have no is excellent and I’m excited to turn it into a film!

If you are working on your first movie, remember that the writing is the cheapest stage. This is the time to experiment and make the leanest, strongest, most compelling story. During filming, if something isn’t working right with the story, you waste hours with the actors and crew. That’s thousands of dollars in equipment and hourly wages. Spending an hour or even a day to fix something while it’s on your computer will save thousands of dollars.

Next up, more on the challenges of making a film, how to come up with the money, and location scouting!

It’s official, my friend and I are making a short film! If you asked me a year ago what I thought I would be doing now, I never would have guessed this. Life takes you on a bizarre and awesome path when you follow your interests.

In my continuing effort to share what I’m working on while still keeping my posts helpful and accessible, I now introduce a series of broad lessons I’ve learned from the process of making a movie. These lessons are helpful to anyone who’s trying to make something bigger than themselves.

Step one: Announce yourself

During the last writer’s conference, I asked my audience if they consider themselves to be writers. I was surprised that most of them said no. They believed they needed the external validation of an MFA or a publishing career in order to use that title. I shared with them that my life was never the same after I started describing myself as a writer.

So, yes, first things first, let everyone know what you consider yourself to be and what you hope to do. I made it very clear to everyone I know that I’m a writer. For the last few months I’ve been letting people know how much I enjoy writing screenplays and that I hope to develop a project.

That brings us to the lovely Ashley H., who you might remember from when I dyed my hair purple. Ashley knew that I was interested in screenwriting. She also knew that her friend, Caroline, was interested in screenwriting. With this simple email from Ashley: “I really think the two of you should meet and discuss things!” we were off!  It was a match made in movie-making heaven.

Do you see how important it is for your friends to know what you are interested in doing? If I had kept my ambitions a secret, if I was too embarrassed to say what I wanted, Ashley never would have thought of introducing us. If you want to start an ice cream company, start telling everyone you know. If you want to put on a one-woman show, start talking about it now. After you share what you’re passionate about, you’ll be amazed at the connections that start popping up!

So what is your dream? What do you want to do that is bigger than yourself? I’d love to hear it in the comment section below!

Stay tuned for the next step in making a movie!

Apparently I chose a color that’s on trend and impossible to find. I wanted a look that went from black to dark violet to silvery lavender. The fist beauty supply store didn’t have the colors and told us to go to Wigs and Plus to get the lavender dye. Ashley, ever the trooper, made the trek only to find out they have been sold out of lavender for three months. While searching high and low for this dye, Ashley ended up running into the actual Ricky of Ricky’s NYC, a specialty beauty supply store that’s awesome. He told her there was no way she’d ever find lavender dye and gave her the recipe for making it (3oz of clear dye, 1 oz of pink and a drop of violet dye).

So yesterday we got started on the purple ombre! 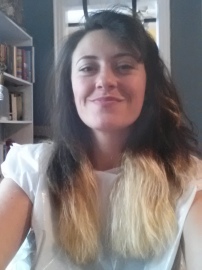 Time to get rid of this skunk look! 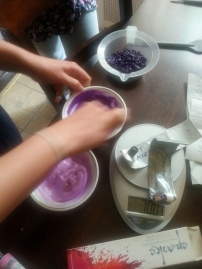 Had to make sure they were all well blended.

The three beautiful shades of purple. 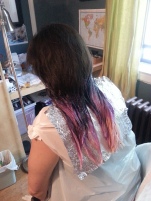 Not looking too good 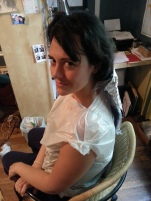 Only time will tell!

I washed out the dye and started styling. I love how it came out! Mermaid hair!!!

I love the suble gradient! Ashley did such a great job!

It’s so cool to see how different it looks with every movement. 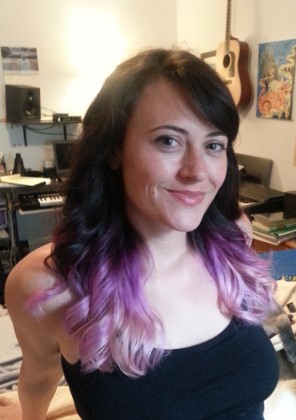 Now that it’s done I have no idea why I waited so long. A HUGE thank you to Ashley for your time, encouragement, and artistry!