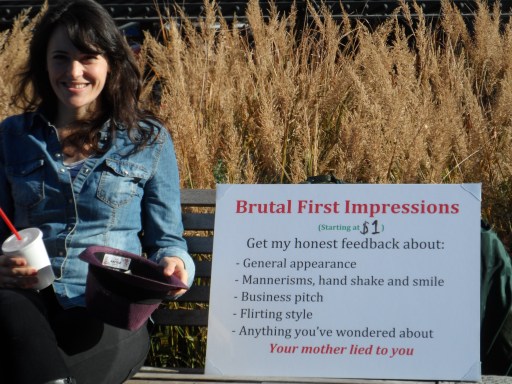 Day 2 on the High Line

Since I got such a great reaction to my crazy idea, I decided to go out this past Saturday and try it again . My friend and I visited the High Line, which is one of my favorite spots in Manhattan. This historic, elevated railway line was converted into a public park in 2009. With help from a long list of high-profile investors (such as David Bowie), the High Line has become a great place to stroll along the West Side, 30 feet above ground, and soak up the indigenous flora of New York along side the glass and steel high-rises. They have great food vendors too!

At the center of a crowd.

I was a little hesitant about taking this project to the High Line because they’re strict about street performers, but two separate guards came by to tell me that technically I wasn’t allowed to be there, but that it was so funny they would look the other way. The crowds started instantly.

Again, people could not fathom how I came up with this idea. Coming up with the idea was easy – actually going outside and trying it out, subjecting myself to potential ridicule and public shamming, was the hard part. I feel like I’ve invented the adult version of the lemonade stand; something that gets people to stop and say, “oh that’s too cute, honey, give her a dollar.”

Giving advice on a handshake.

So far three different people in television have expressed interest in this idea. I’m not holding my breath, and I certainly didn’t do this to get a pilot, but I do love the idea that as soon as I got out of my comfort zone, opportunities just started presenting themselves. 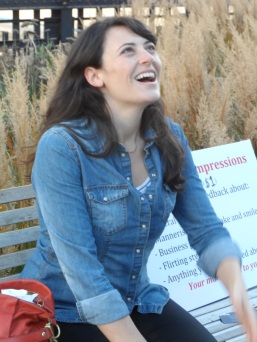 People tell me the funniest stories when I’m doing this.

At the end of the day, this is a lot of fun. Yes, I’m wracked with anxiety before I go out, but it’s easy to feed off of everyone else’s enthusiasm. There’s a lot of laughter and appreciation. Yes, appreciation.

I can’t believe how much people love to hear criticism. While I don’t critique things that people can’t change, I’ll tell someone they should try a different lipstick color, or  that their pants don’t fit them right. When they listen to this they look relieved. Perhaps they’ve wondered about the lipstick before, and now they finally have a stranger’s confirmation. Or maybe they just appreciate having someone’s undivided attention for a few minutes. I don’t know what it is exactly, but people are really enjoying it.

I felt like such a mom telling this girl to keep her hair off of her face.