You might be wondering why I’m writing about an eyeglass store on my blog that’s supposed to be about following your heart and soul (HeSo). I hate shopping for glasses, but I stumbled upon a store that made me enjoy the experience so much I talked about it for days afterward.

After doing some more research, I found out that this was definitely a HeSo inspired endeavor. The company was started by four friends who were tired of cool glasses costing so much. They opened up a store that would provide the designs that they liked for an affordable price, and they named it after two of their favorite Jack Kerouac characters. To add a cherry on top, they partnered with VisionSpring to provide glasses for people who cannot afford prescription glasses. For every pair you buy, they donate a pair.

Shopping for eyeglasses can be very stressful – you’re basically picking out a new feature for your face. I usually run into clerks who get pissy if I want to try on more than three pairs of glasses. A few weeks ago I decided I want an artsy looking pair of glasses, so I popped into the local Cohen’s Optical. I tried on every pair (to the sales clerk’s dismay) and only ended up liking one pair. Even after getting a $100 discount the glasses with lenses were going to cost over $400! That’s when I remembered a local news show that was highlighting an eyeglass store with a social mission. For every pair you buy, they donate a pair to children who cannot afford glasses. They have distributed over 150,000 pairs in developing countries.

I visited Warby Parker’s showroom in a trendy office space in Soho. One-half of the office was taken up by desks and people busy at work. The other half was the showroom. As soon as I arrived a friendly girl introduced herself and told me to make myself at home and try on any pair I like. The people helping were not pushy at all, but they gave honest opinions. At one point, I tried on a pair and the woman next to me said, “oh god take those off right now!” I appreciated the honesty. It felt like I was shopping with friends.

I stayed there for about an hour trying on every pair, and I never felt pressured to buy. They were playing awesome music and everyone trying on glasses was dancing around. When I finally settled on a pair of reddish-brown sexy librarian glasses, they suggested that I walk around the office and introduce myself while wearing the glasses to see if they felt comfortable. There are mirrors all around the place, so they told me to occasionally look up and catch a glimpse of myself with the glasses. That would give me a much better idea of how the glasses looked without posing.

I walked around the office, and everyone was so nice and they all seemed to really enjoy working there. One guy asked if I wanted to help with their bifocals project which just meant that he wanted to measure the distance between my eyes. Then he gave me a card for 15% off. Someone else gave me a lollipop. The lollipop threw me over the edge – I was ready to make the purchase. 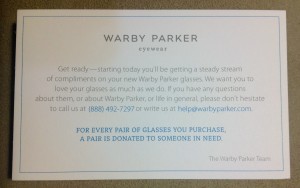 The really cute thank you card that came with the glasses

I was afraid of how much it would cost because the place felt like a very expensive, trendy Williamsburg boutique. When they told me my total was $85 I asked them ‘how much do the lenses cost?’ She laughed and said that price included anti-reflective, polycarbonate lenses. I wanted to run out of the store before she realized that she undercharged me. Then I asked, ‘well how much does it cost to donate a pair?’ She laughed again and told me that was also included in the price. I’ve never paid so little for glasses and actually enjoyed the experience.

My glasses arrived at my doorstep three days later with a great thank you note. They even called me that day to see if I received the glasses and if I was happy with them.

Here’s the extra cool part…if you don’t live in the area, they will ship five pairs to your house for free so you can try them on. I will never shop anywhere else. I really appreciate their work model.

So now without further ado, Here are my new glasses…

My new glasses! You can see my Reilly painting in the background.